Vocal Arts DC presents a full season of classical song recitals by some of the world’s finest singers at the Kennedy Center’s Terrace Theater.  Our performances are supplemented by educational and social events that foster personal contacts between performers, composers and audience members.  Typically showcasing a single classically-trained singer and a world-class pianist unaided by amplification, our concerts cover a wide range of the world’s great song literature, increasingly including newly composed works commissioned by our performers or by Vocal Arts DC itself.

Our existence is a demonstration of what a single individual can accomplish when armed only with an idea and the determination to make it work.  Disappointed by a scarcity of classical voice recitals in the DC area, in 1990 a local psychiatrist and music lover, Dr. Gerald Perman (1923-2015), decided to create a non-profit organization under the name of The Vocal Arts Society (now doing business as Vocal Arts DC) to bring high-quality recitals to the region.  With no experience in the actual business of being an impresario, he had the courage to launch a venture, running it initially largely through his own efforts and those of volunteers.

From a modest first season that featured a rising young soprano named Renée Fleming performing in the Sumner School auditorium, the fledgling organization has attracted a growing and devoted audience, now presenting a full annual subscription concert series.  Our venues have moved from that humble beginning to the French Embassy’s Maison Française and finally to the Kennedy Center’s Terrace Theater, where we perform today. 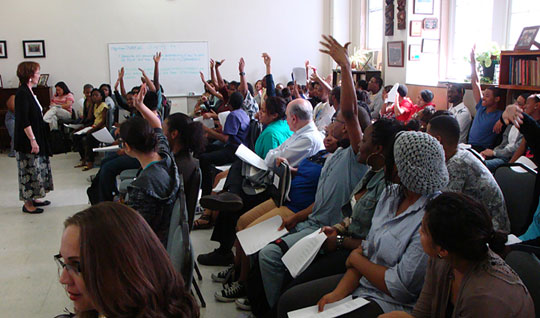 Vocal Arts DC is one of America’s leading presenters of concert song and is a vital force in the cultural life of the Washington metropolitan area. Vocal Arts works to keep alive the intimacy and conviviality that is the heritage of concert song through an annual recital series and through social and educational events that foster personal contact between performers and audiences. Vocal Arts DC is a non–profit corporation, qualified under Section 501(c)(3) of the Internal Revenue Code.

Vocal Arts DC gratefully acknowledges the dedicated service and contributions of its volunteers, whose diverse skills are invaluable.